What’s the point of learning? Piers Plowman and education today

As Donald Trump proposes cuts to student financial aid, a medieval poem can teach us the importance of education

ast Monday was the first day of classes here at Boston College, where I teach English literature. The usual introductory questions—Where did you grow up? What is the goal of this course?—felt urgent, even metaphysical. Higher education can be expensive, impractical, and a multiplier of social inequality. Why bother?

For a growing minority of Americans, the question has become rhetorical. In July, a Pew Research Center poll revealed that most Republicans and Republican-leaning independents (58%) believe colleges and universities have a negative effect on the country. That number is up from 45% last year. President Trump’s budget proposal for 2018 would dramatically reduce federal funding for student financial aid. His Secretary of Education, Betsy DeVos, is a committed opponent of institutions of public education. 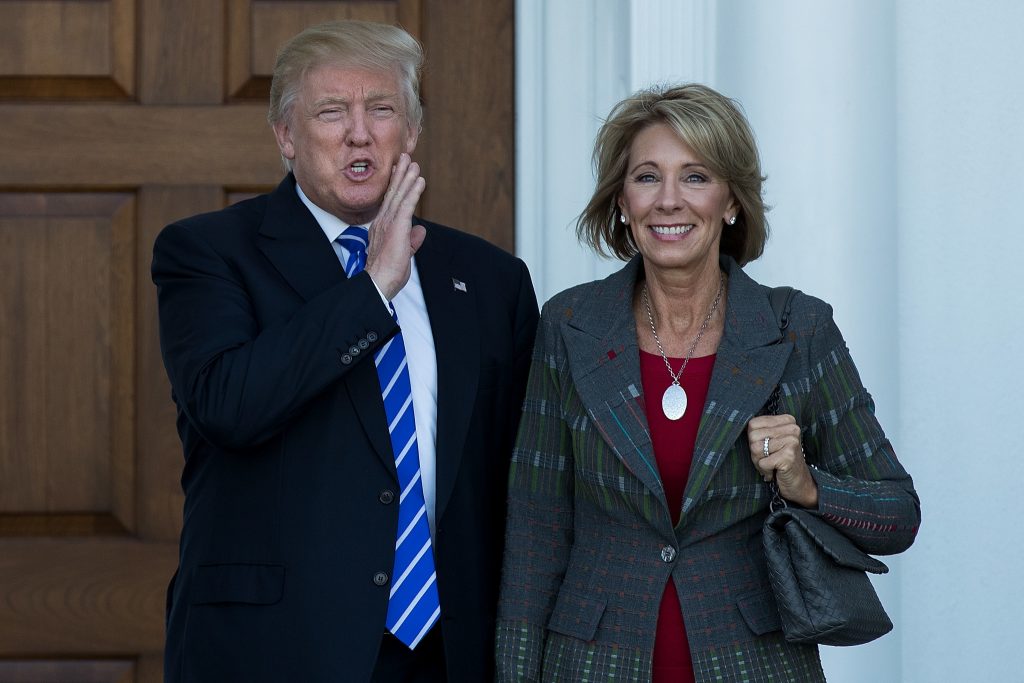 Anxiety about the place of education in society is nothing new. In the late 14th century, the English writer William Langland considered these issues at length in his religious/political poem Piers Plowman. Langland was a highly educated man who questioned the ultimate value of education. Today, this medieval poem brings into focus the enduring challenges of education as a social and ethical project.

Langland worked under very different circumstances from 21st-century college students and teachers. In 14th-century England, education had not yet been democratized. Grammar schools, and especially the universities of Oxford and Cambridge, were exclusive institutions serving boys and men from a relatively narrow set of social classes. The sons of some poor families had access to free or subsidized grammar schools. The most powerful members of medieval English society, the nobility, tended to bypass grammar school entirely through home tutoring. Room and board at the universities were beyond the means of many, but skyrocketing tuition and the casualization of academic labor still lay far in the future.

Strong social and intellectual bonds existed between educational and religious institutions in this period. Grammar schools often fell under the purview of bishops, and theology was the jewel of university curricula.

Education in 14th-century England was not under governmental threat. Even so, Langland worried that education was ruining any chance of realizing social justice (a core component of Boston College’s Jesuit Catholic mission). 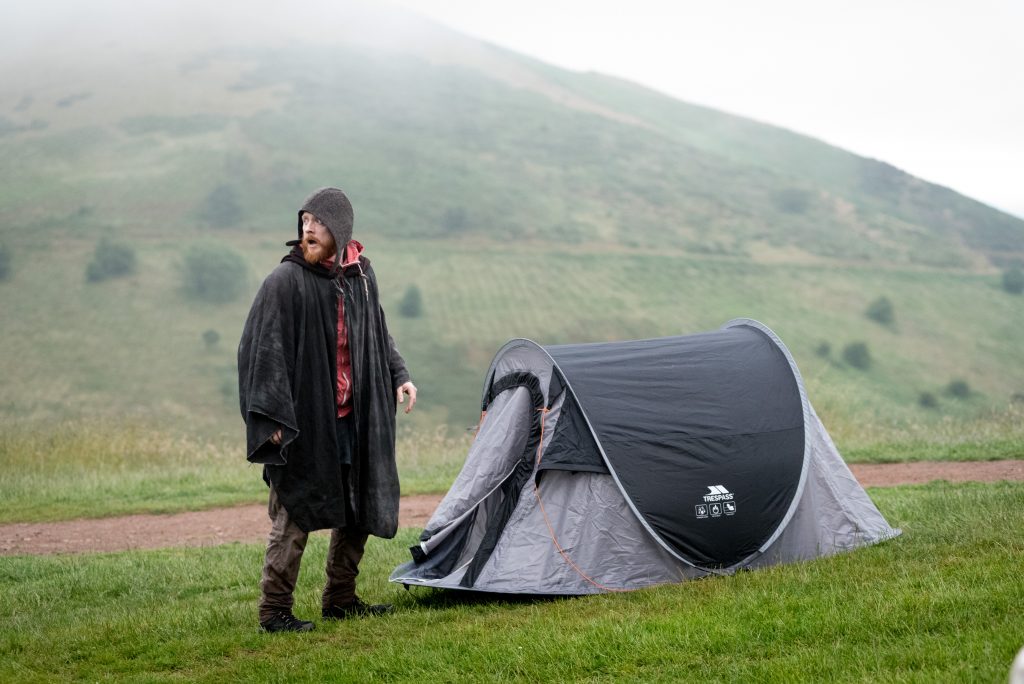 Robin Berry as Will in Fair Field (Photograph by Graeme Braidwood)

We know very little about Langland’s life—‘Langland’ may be a pseudonym, a nickname, or his mother’s name—but Piers Plowman gives ample evidence that its author had studied in grammar school and probably also at Oxford. Written in English alliterative verse, Piers Plowman is studded with Latin words, phrases, verses, and quotations drawn from holy scripture and popular grammar-school texts. Indeed, in a 2016 book, Christopher Cannon argues that the study of (Latin) grammar is the essential social experience informing the art of Piers Plowman.

The poem takes the form of a spiritual education. The narrator/dreamer Will (at different moments, a given name or a personification of the will) discourses with Holy Church, Clergy, Theology, friars, and a host of other authoritative ‘persons.’ Langland does not portray these intellectual engagements in a simply positive light. Will, a mediocre student, misunderstands his teachers, and his teachers reveal their own limitations through self-contradiction and the interruptions that jolt the dream vision from one phase to another.

At the heart of Piers Plowman’s restlessness is the problem of salvation. “How can I save my soul?” (C.1.80; my translation of Derek Pearsall’s edition), Will asks Holy Church near the beginning of the poem. The task Langland sets for the dreamer is to discover whether existing institutions, including educational institutions, can win salvation for individual souls and for the Christian community.

For a 14th-century poem, Piers Plowman is notably ambivalent about the value of 14th-century institutions. In Piers Plowman, institutions malfunction and serve the interests of the powerful. In one memorable passage, Will finds himself at a feast with Reason, Patience, and a fat doctor of divinity, among others. The menu is mostly scripture, though soup, stew, and wine are also on offer. In this psychedelic scene, the doctor stuffs his face and bloviates on theology. Will remarks to himself that the university man is “a selfish glutton with two big cheeks—/ He has no pity on us poor people; he misdoes / What he preaches and does not demonstrate compassion” (15.85-7). When asked, the doctor rather conveniently defines doing well as “doing what doctors teach” (15.124).

The doctor of divinity, a nameless caricature, sums up the traps of higher education. Expert in the most prestigious academic subject known to Langland, the doctor is also pretentious, greedy, and insulated by wealth from pressing social issues. Will perceives that he doesn’t have the whole answer to the question of salvation. 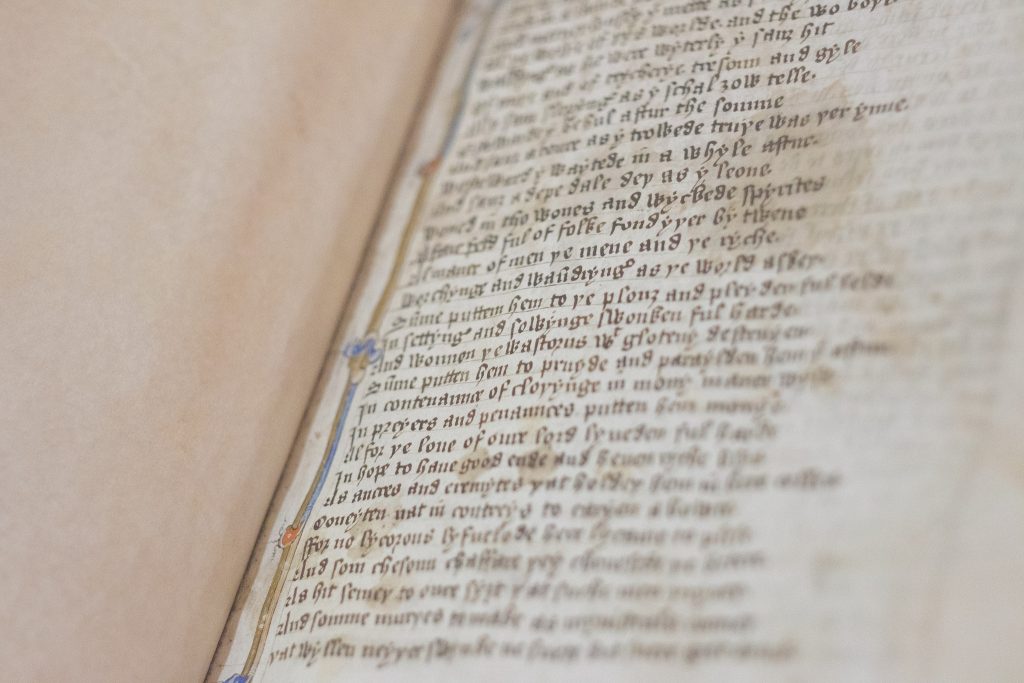 At times, Piers Plowman despairs that education could have any value at all. In one unforgettable passage, Langland muses, “Unlearned honest laborers and land-tilling people / Pierce with a pater noster the palace of heaven / And pass through purgatory without penance on account of their perfect faith” (11.293-95). What if education simply equips students to justify sin to themselves? Would our souls be better off without it? Langland wonders. Yet he hedges his bets by placing this radical sentiment in the mouth of a character named Recklessness, Will’s impetuous alter ego.

Langland’s strategy, as in other facets of his poetics, is to deconstruct education in order to reform it on different grounds. In the penultimate scene of the poem, the shadowy Christ-like figure Piers Plowman receives the Four Evangelists from Grace as “four big oxen” (21.262) with which “to teach the faith” (271). Langland takes the opportunity to pun on ‘team (of oxen)’ and ‘(homiletic) theme,’ pronounced the same in Middle English. Education and its institutions are redeemed through a vision of society founded on manual labor and the harmonious interpretation of scripture: a synthesis of lay and learned cultures. But the vision doesn’t last. Piers Plowman ends with a successful assault on Conscience and the church by devils, wicked friars, and other enemies.

The ideological battle over the soul of higher education has deep historical roots. Then as now, education at its worst effectively helps the powerful accrue social and financial capital. A majority of Republicans and Republican-leaning independents now see higher education as fundamentally compromised by modern versions of Langland’s doctor of divinity. Republicans, increasingly defined by adherence to conservative ideology, view institutions of higher education through the prism of partisanship. The Trump administration has undertaken to enshrine that dissenting view in policy.

At its best, education develops terms and tools to achieve lasting social justice across difference. In the 1370s and 1380s, William Langland had a vision of social justice through education but felt compelled to present it in brackets, with severe caveats. In that tradition, students, faculty, and others still invested in the social and ethical missions of institutions of higher education can look to the future with optimistic caution.

Eric Weiskott is Assistant Professor of English at Boston College, where he teaches and writes about medieval English literature. ericweiskott.com