om had seen The Society of Strange and Ancient Instruments‘ performance of Nine Daies Wonder, and he thought that we might be the right people to work with on Fair Field. I was immediately drawn to the idea of the project and excited by the opportunity to collaborate with poets, writers, story tellers, performance artists and actors in a cross-disciplinary project.

We’ve worked in a cross-disciplinary way before. For example, in Nine Daies Wonder we collaborated with a dancer and a playwright/actor, and in our current project, Sound House, we’re working with an actor and a sound designer. In Fair Field, we’ll be collaborating with the other artists in their development of the poem. We haven’t worked as widely across the arts before which makes this project an exciting prospect. We’re involved in almost all of the ‘moments’, which will be created for Fair Field, so the music will form an important thread which will run through the whole piece, and I hope, bind together the various elements.

The R&D week was extremely productive. I found it expanding and stimulating to collaborate with the others on the poem. By the end of the week we had generated a portfolio of ideas to work on – a perfect springboard for the next stage in the project.  I found that very exciting.

It was refreshing to explore various sounds and fragments of musical material with the writers and performers. For example, Nick Field and I were able to create new material together in the same space and the same time. It’s rare to have the luxury of working like that, even though that method of working is often fruitful. We usually take existing words and add music, or add words to music. Bringing all these different people together and creating new material together proved a perfect way to deal with the challenges of this project. There was no pigeon-holing which allowed the work to become much more than the sum of its parts. 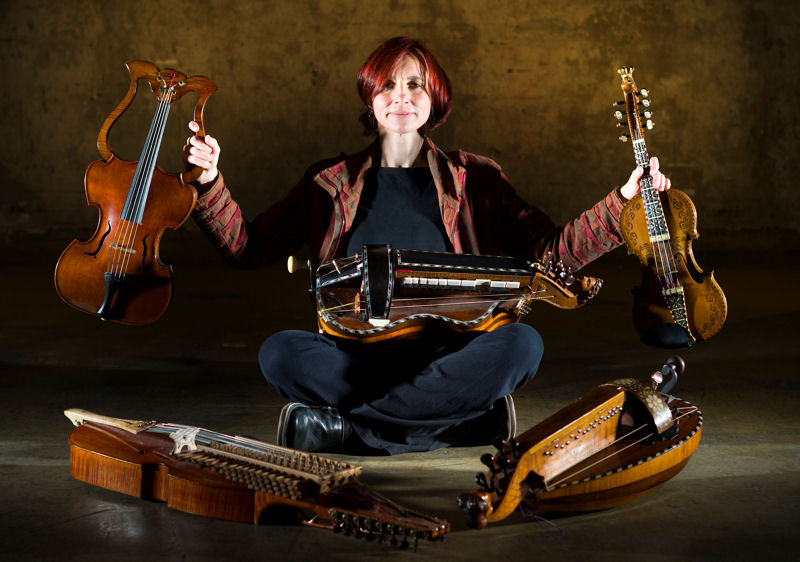 This is a wonderful opportunity for us, and for everyone who is working on the project. In The Society of Strange and Ancient Instruments’ projects we try to be open-minded and we’re always looking for new ways to explore artistic material and to communicate that to as wide an audience as possible. Fair Field is providing the perfect opportunity to develop that practice.

I am keen for the work that The Society of Strange and Ancient Instruments produces to be relevant to the busy and exciting modern world we live in. Even if our work is based on music and instruments of the past, it must resonate with modern audiences – it has to mean something today. To that end, medieval music is exciting material to use because a lot of it is so open – there are few surviving tunes – so you end up inventing a lot from fragments, or making up melodies to work with existing lyrics. We’ll be doing some of that in Fair Field, alongside inventing new material through improvisation and composition.

I want our contribution to Fair Field to be thought-provoking as well as accessible. There are exciting artists working on this project, and, having had a sneak peak at what some of them have been up to, I’m sure that together we’ll produce an entertainment, which is strikingly inventive, thought-provoking and moving. Audiences are going to have a great time.