Medieval menswear is having a fashion moment. No, really.

t might seem to you like retro fashion taken too far, but over the past few seasons Medieval influences in menswear have been a storyline in major label collections from Dolce & Gabanna to Versace. What does that mean? Well, generally it means those influences will trickle down into highstreet menswear. 650 years on, Piers Plowman might finally become an icon of high fashion.

Now, let’s not get this twisted. We’re not going to be seeing fashion-forward men donning codpieces to head out into Dalston anytime soon. But, gentlemen, you might well find colours, textures, prints, cuts and tailoring drawing on Medieval influences integrated into your Topman shopping haul. 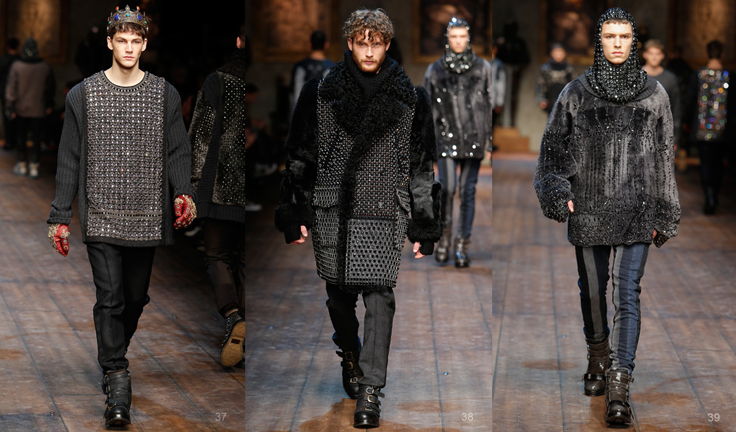 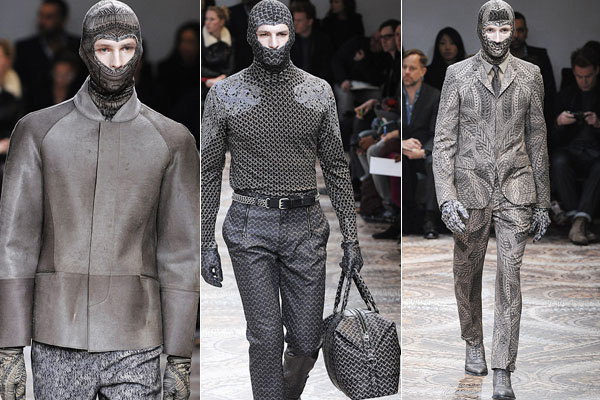 I’m a poet, writer and performance maker, but in a parallel career I am also an art director for fashion photoshoots. It was, coincidentally, through medieval fashion that I was able to combine these different aspects of my work. In 2015 I was Artist in Residence at London Metropolitan Archives for the project Streetlife London: from Chaucer to Banksy. For this residency I researched aspects of London’s rich streetlife history and created new work inspired by it. During my research I found a series of illustrations by Roger Leigh dating from c.1450 that document medieval street fashion. I was really grabbed by how vivid they are, and how clear the sense of period fashion is in them. They reminded me of the street style fashion features we see today. At the same time, I was noticing how medieval influences were cropping up in menswear in fashion week catwalk shows – both from major and avant-garde labels. I was inspired by this to write a piece for the collection Cries of London that resulted from the residency. Inspired by a particular very dapper looking gentleman in a Leigh illustration, I scoped the history of London street fashion…

It took 700 years, for my look to finally break,
I always was ahead of my time.
My pleated tunics turned heads when I first stepped out.
But, inevitably, everyone was soon in them too,
paired, of course, with my signature pointed shoe.
And when I slashed my cloak at the side,
it was almost tiresome to see it replicated,
though no-one else had my eye for detail;
a plaid lining and a statement belt. Devastating
Let’s not even speak of my innovative hat/scarf combination.
London’s streets were my showroom, and so I waited.
I admired the slashed doublet, and coveted the ruff,
the bigger the better; I would have worked an underpropper.
I adored the dandies, their yards of knotted neckerchief,
the intricate, precision cut of their tailoring;
the spectacle of self, a Regent Street statement of heaven.
I revelled in the visions of bold print and shape,
a revolution of youth, thigh-high patent boot;
strutting out from Chelsea to Carnaby to the world.
Overturned and overturned on and onwards.
Nascent, always new, never resting.
The streets a thermometer, the trailblazers pushing.
Punk though, messy and dirty, I never abide,
Not until it was crafted by a genius’ eye.
Then finally I was back.
Autumn/Winter 2016 London Fashion Week,
filled with my silhouette.
(Vaguely mine, but after 700 years I’ll take what I can get.)
Returned, remembered.
My legacy remains.
From street, to art,
and back again.

For Fair Field I am creating a performance inspired by the character of Gluttony in Piers Plowman. If you come along to Ledbury Poetry Festival (1 July) or Shoreditch Town Hall (8 July), you can sit with the Seven Sins and feast at Gluttony’s table! And, you may well find that I’ve worked in some visual references to this medieval/contemporary crossover in men’s fashion.